This post looks at the fourth and final component of our inclusion index – the attainment and progress pupils with an EHCP. You can read a short summary of this article below.

We calculate an attainment and progress score from a combination of:

This gives a broader measure of academic outcomes, accounting for both primary and secondary education, as well as those who fall out of education or training and end up NEET. While we do understand that success in school, especially for SEND pupils, is not just about exam results, we believe that these five indicators represent key outcomes for any pupil and are the best available public data. Including two progress indicators and a destination indicator helps to make this a more holistic measure of EHCP pupil outcomes than just measuring attainment. This attainment score is therefore the largest factor in the overall index, accounting for 42% of the overall score.

In this blog post we look at the landscape of attainment across England and, in particular, the large variation between LA areas. We then examine some possible causes of this variation, exploring contextual factors affecting attainment scores for SEND pupils. 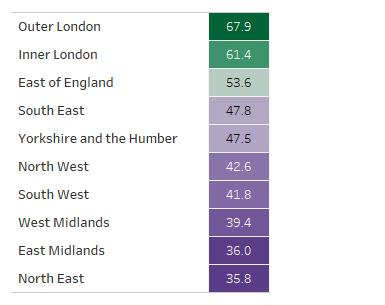 There is a clear London advantage in attainment scores for the SEND cohort, which mirrors the good academic performance of London more generally. Outer and inner London’s average attainment scores are far higher than any region outside London. The North East and the East Midlands score lowest for attainment and progress of EHCP pupils.

The interactive map below allows you to explore attainment data for each LA area in England. Hover over an LA area on the map to see its average attainment and progress data over the last three years. The overall attainment score is calculated out of 100.

Notably, seven out the highest scoring ten LA areas are in London. Six of these are in outer London, the most consistent regional performance across the four indicators we have looked at. Westminster (inner London), the highest scoring LA area has an EHCP average Progress 8 score of -0.28, compared to -1.45 in Liverpool. Average Attainment 8 scores for EHCP pupils vary from 5.8 to 32.8 between LA areas. Average RWM KS2 attainment ranges from 2% of EHCP pupils achieving the expected or higher standard, to 28%. 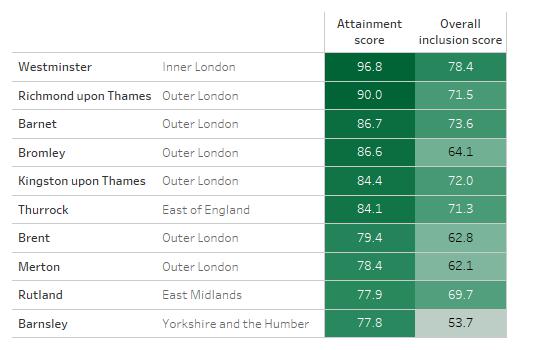 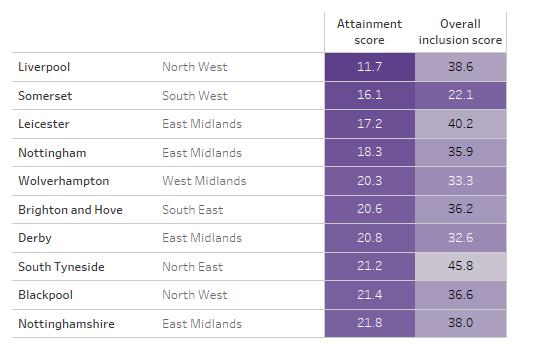 We explored three factors in an attempt to explain the variation in EHCP attainment and progress observed:

1. Does the EHCP cohort size effect explain variation in attainment?

As discussed in part 3 of this series, larger EHCP cohorts tend to achieve higher average attainment. We argued that this is likely to be due to the inclusion of pupils who have less complex needs. These pupils will tend to have higher attainment. Before any decision maker tries to understand the attainment of SEND cohorts in their area, they must consider the size, and nature, of the EHCP cohort. 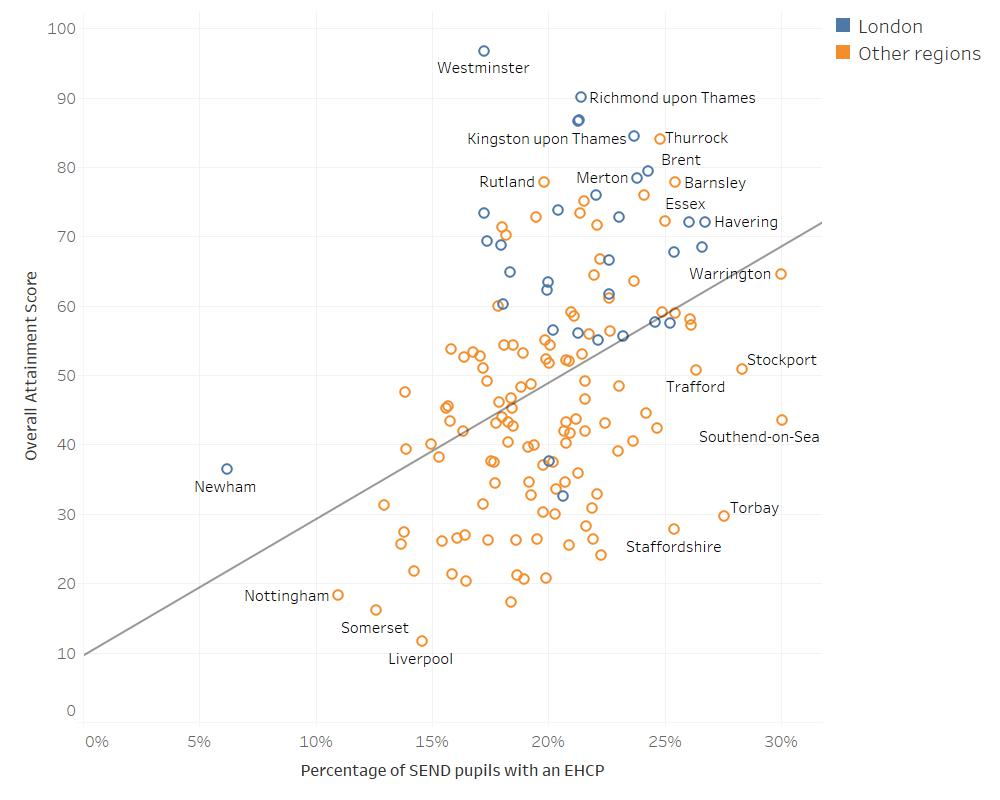 This relationship, in part, helps to explain why London scores so well on attainment. While Newham is an exception, London LA areas tend to have relatively large EHCP cohorts. As discussed, this is likely to increase average attainment of the cohort. On the other hand, almost all London LA areas sit above the trend line, suggesting that they have even higher attainment scores than would be expected given the relative size of their EHCP cohort.

2. Is attainment driven by deprivation?

Deprivation is correlated with both poorer attainment and poorer progress for pupils with an EHCP at KS4. In fact, the 50 most deprived LA areas have an average Attainment 8 score of 11.5, while the least deprived third had an average score of 15.3. The disparity is smaller for Progress 8 scores, with a 0.24 point difference between the average score in the most deprived LA areas and the least deprived. The slightly smaller disparity may be a result of EHCP pupils in more deprived areas having lower prior attainment.

There is also a correlation between higher levels of deprivation and the percentage of EHCP pupils who became NEET. In the 50 most deprived LA areas, an average of 11.1% of 16 and 17 year olds with an EHCP are NEET. This figure is 8.0% in the 50 least deprived LA areas.

However, Figure 6 shows that deprivation levels alone cannot explain why London scores so high for attainment. The London LA areas are not noticeably less deprived than others. Moreover, all but a handful of London LA areas sit above the trend line, meaning they are outperforming what might be expected for an LA area with their level of deprivation. Furthermore, many London LA areas are amongst the most deprived.

The relationship between EHCP pupil average attainment and deprivation is very different at KS2. Surprisingly, progress in reading, writing and maths at KS2 is positively correlated with deprivation meaning EHCP pupils in more deprived areas tend to achieve better KS2 progress scores. This relationship might be a result of small numbers of KS2 EHCP pupils having a prior attainment score, and therefore progress scores only being based on a small proportion of all EHCP pupils. Unfortunately, the published data does not give this information.

The proportion of EHCP pupils who achieve the expected or higher standard in RWM at KS2 is only weakly correlated with deprivation, in contrast to the strong correlation found above between Attainment 8 and deprivation.

Although less stark, Figure 7 again shows that a majority of London LA areas sit above the trend line, outperforming the scores expected for an LA area with their deprivation level.

3. The effect of cross-border movement

As discussed in part 4 of this series, LA areas vary in the number of special schools they have. Attainment data is based on school (not resident) populations. We therefore wondered whether areas drawing in a large number of special school pupils may end up with an EHCP cohort with relatively more complex needs, and therefore lower average attainment. If it is the case that special school pupils are likely to be those with the most complex needs, then this could be happening.

Next, in our final post of the series, we discuss our conclusions and learnings from creating the inclusion index.

While academic attainment is clearly important for all pupils, any analysis of academic outcomes of SEND pupils should take into account the cohort size and characteristics. It is also important for schools to monitor the non-academic progress of pupils with an EHCP, including social and emotional development.