This post continues our exploration of inclusion, focusing on the third component of our inclusion index: the school placement of pupils with an Education, Health and Care Plan (EHCP). You can read a short summary of this article below.

The placement score in our index is derived from two indicators:

Although there are, of course, some SEND pupils whose needs mean that they will benefit from specialist provision, as well as some children and parents who choose independent provision for other reasons, we believe that the majority of SEND pupils are best served by well resourced and inclusive SEND provision in mainstream schools. To enable this, schools must be properly resourced and have the required expertise to be able to provide a truly inclusive education to their SEND pupils. Our approach is consistent with recent research by London Councils that found that:

‘The most common definition of inclusion expressed by both local authorities and schools was “children with SEND being able to attend their local school.” [1]

Similarly, the Association of Directors of Children’s Services (ADCS) have called for:

‘Greater focus and attention on the benefits of an inclusive mainstream education. All but the most severe or complex needs should be met locally so children can stay within their local community, close to friends and family networks.’[2]

In this article we give a brief overview of the current landscape of placement scores across the country. We then explore how differences in the volume of special schools and deprivation levels impact SEND pupils’ school placement.

The interactive map below allows you to explore school placement data for each LA area in England. Hover over an LA area on the map to see its average placement data over the last three years. The overall placement score is calculated out of 100. 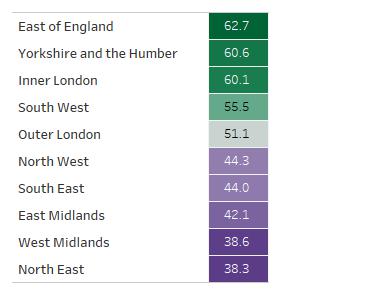 The East of England is the region with the highest average placement score – i.e. the region where the lowest proportion of EHCP pupils are in state special schools and independent schools. The North East has the lowest average placement score. The North East’s low score is driven by the high proportion of EHCP pupils placed into state special schools, rather than having high numbers in independent schools.

While London (inner and outer) scores highly in our overall inclusion index, it scores slightly less well on our placement indicators. Inner London ranks 3rd out of the ten regions for placement score whilst outer London ranks 5th. The regions with the highest proportion of their EHCP cohort in independent or non-maintained special schools were inner and outer London. Interestingly, these two regions had the lowest proportion of its EHCP cohort in state special schools. This suggests that placement of EHCP pupils in special schools may be driven by the provision available locally rather than a policy decision.

Which LA areas have the highest and lowest placement scores?

The tables below present the placement scores and three year averages for the two underlying indicators for the lowest and highest scoring LA areas. 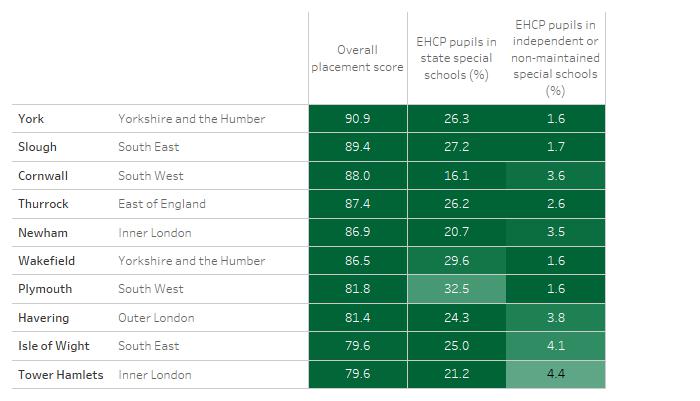 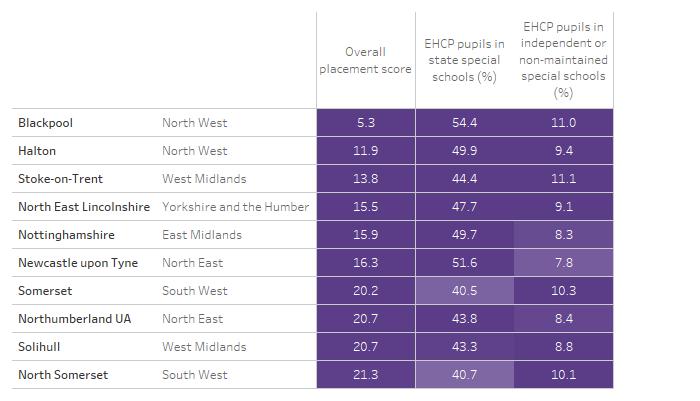 We explored two explanations for this variation:

The chart below shows the relationship between the numbers of special schools in an LA area and the proportion of EHCP pupils attending independent or non-maintained and state special schools. The size of each bubble reflects the 0-24 year old population of the LA area. 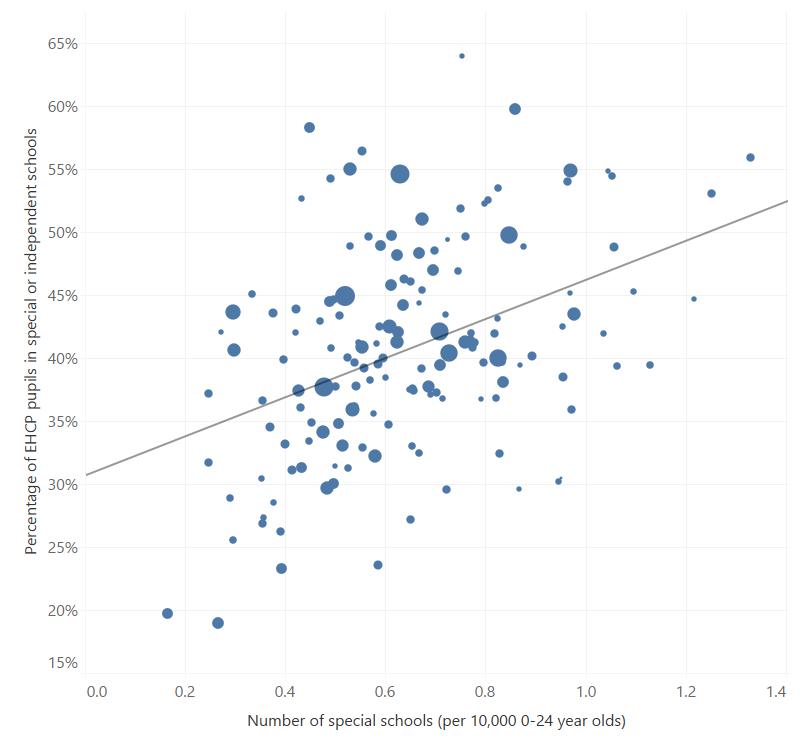 The fact the placement decisions depend on local provision is not a surprising finding, but it is important to understand. Using the latest data, we looked at the number of state special schools per pupil (using 0-24 year olds population for as a proxy for pupil numbers) and compared it to the percentage of EHCP pupils studying in special schools. We found that the more special schools relative to the numbers of young people, the higher the proportion of EHCP pupils studying in special or independent/non-maintained schools.

2. How does deprivation impact placement?

We found two ways in which deprivation level impacts school placement. Deprivation influences both the choice between independent and state-funded special schools and the provision of both types of schools in an LA area. We used IDACI (income deprivation affecting children index) scores to measure deprivation. A higher score indicates a higher level of deprivation. 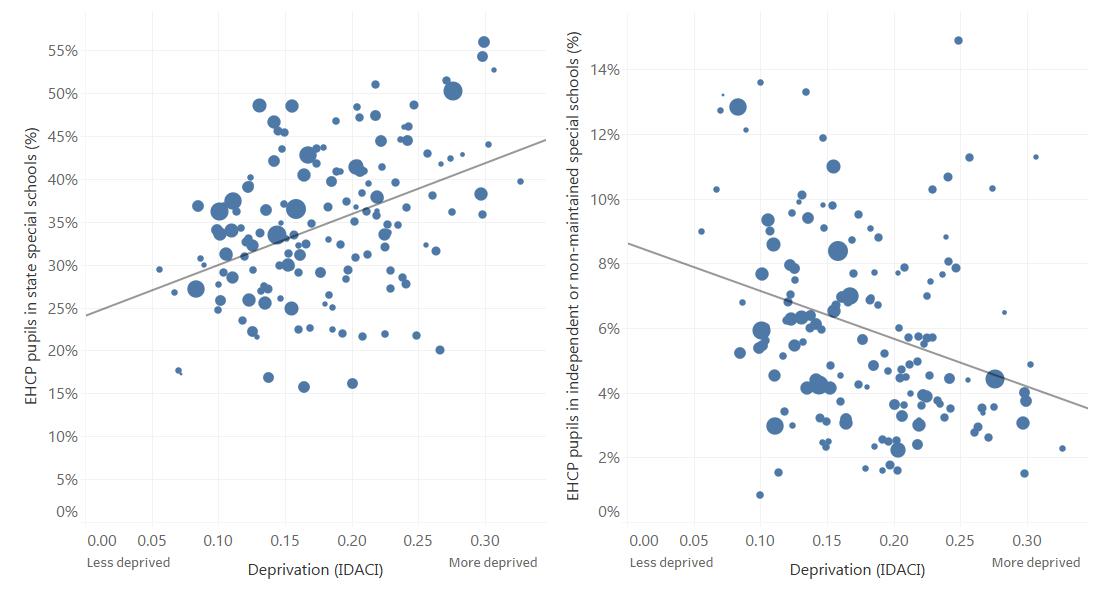 Figure 6 shows that LA areas with higher levels of deprivation tend to place a larger proportion of EHCP pupils in state special schools, but a lower proportion in independent sector provision. The size of each bubble reflects the 0-24 year old population of the LA area.

This suggests that the lower rates of EHCP pupils in independent or non-maintained special schools in more deprived areas (as above) may be partly explained by the availability of provision but the higher proportions in state-funded special schools cannot be.

The variation of provision reinforces why it is better for EHCP students to be well served in mainstream education. If SEND pupils cannot be provided for in mainstream schools, they could face long journeys to special schools in other LA areas. Aside from the time cost, this risks pupils feeling detached from their local communities. It is also very expensive for councils to provide this transportation. This is particularly true for pupils in more deprived LA areas, which have lower levels of provision of special schools within the LA area. Although we argue that as many SEND pupils as possible should be kept in mainstream education, for those who are better served in special schools, this inequality of provision is a concern.

In the our next inclusion series blog, we look at the attainment and progress of EHCP pupils.

Whether a pupil is kept in mainstream state education or placed into specialist provision is clearly a critical decision for children and their parents. A more inclusive system would ensure better provision in mainstream education, reserving specialist education for those with the most complex needs.

[1] London Councils. Inclusive Practice: Inclusion of children with SEND should be the default in all schools (October 2019)

[2] ADCS. ADCS response to the Department for Education’s call for evidence on provision for children and young people with special educational needs and disabilities, and for those who need alternative provision (July 2019)