Following our analysis of exclusions, in part 2 of this series, we next look at how Education Health Care Plan (EHCP) assessments affect our overall inclusion index. You can read a short summary of this article below.

An EHCP is a legal document describing a pupil’s SEND, a support plan and target outcomes. If a school or parent feels the needs of a pupil are not being met under SEN support, an EHCP can be applied for through the local council and, if awarded, they give schools access to additional funding to support these pupils. Our index looks at the percentage of all SEND pupils (i.e. those with either SEN support or an EHCP) in each LA area’s schools who have an EHCP in order to produce an assessment score.

LA areas where a lower proportion of the SEND cohort have EHCPs are given higher inclusion scores. There are two reasons for this.

In this article we provide an overview of the landscape of EHCP assessment rates across England. We explore the effect of deprivation on assessment rates, and also discuss the implications of differing assessment rates on the overall inclusion index. We show that it is crucial for decision makers to understand how the relative size of their EHCP cohort affects their SEND data more generally.

Figure 1 shows that the percentage of SEND pupils who have an EHCP varies hugely, between 7% in Newham, and 30% Warrington and Southend-on-Sea. Even within each region, the rates of EHCP assessment are very variable. Given the extent of this variation, it is likely that this is a result of differing practices and policies, rather than a genuine difference in characteristics of SEND cohorts.

We explore the implications and causes of this variation below.

The regions scoring most highly for assessment do not score well in the overall index. This is particularly noticeable in outer London, which has the highest overall inclusion score, but the lowest assessment score (i.e. the highest proportion of the SEND cohort with EHCPs). The South West and East Midlands are the second and third highest scoring regions for assessment, but two of the lowest scoring on the overall inclusion index.

A similar pattern can also be seen at the LA area level: 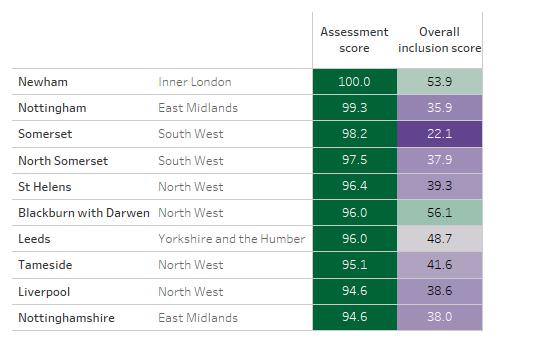 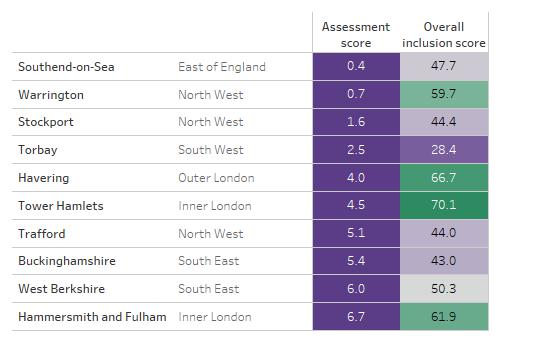 We explored two explanations for this inverse relationship between assessment scores and overall inclusion scores:

We explored how the assessment rate impacts on other indicators in the overall index and found a relationship between assessment rates and EHCP attainment scores.

Figure 6 shows a positive correlation between assessment rates of EHCPs and average attainment scores in both KS2 and KS4 i.e. the more SEND pupils given EHCPs, the higher their average attainment. We argue that this is because LA areas with relatively large EHCP cohorts have included pupils with less severe needs in the cohort. The inclusion of these students pushes up average attainment and progress.

NB. The percentage of SEND pupils with EHCPs is based on the overall cohort, rather than the specific key stage 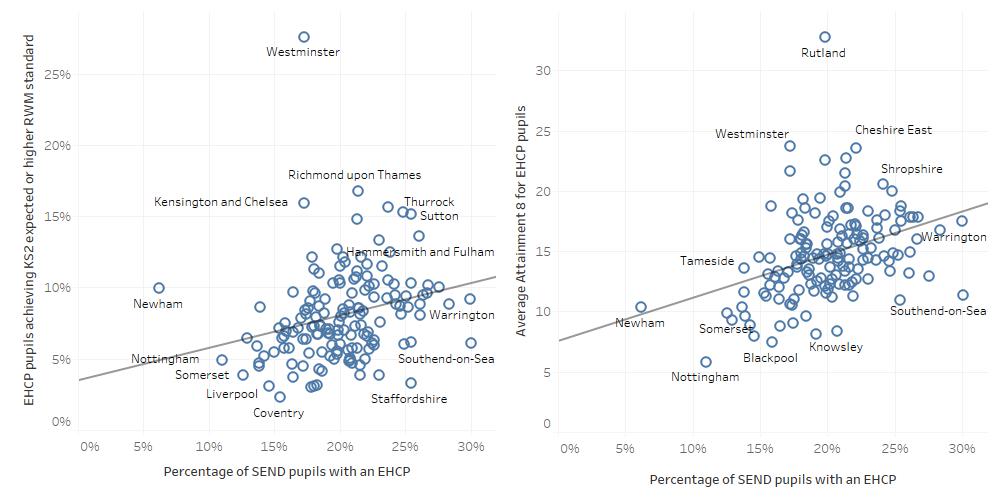 While the relationship is weaker, a similar relationship can be found between the EHCP cohort size and fixed term exclusion rates of EHCP pupils. This further suggests that larger cohorts are including pupils with less severe needs and helps further explain why the LA areas with smaller EHCP cohorts have lower scores in the overall index.

Key finding: The relative size of the EHCP cohorts should be considered when assessing results for EHCP pupils at school and LA level. Larger cohorts tend to have higher average attainment.

2. The impact of deprivation on EHCP assessment, attainment, and exclusion

The chart below shows the relationship between deprivation and the proportion of SEND pupils who have an EHCP. The size of each bubble reflects the 0-24 year old population of the LA area. 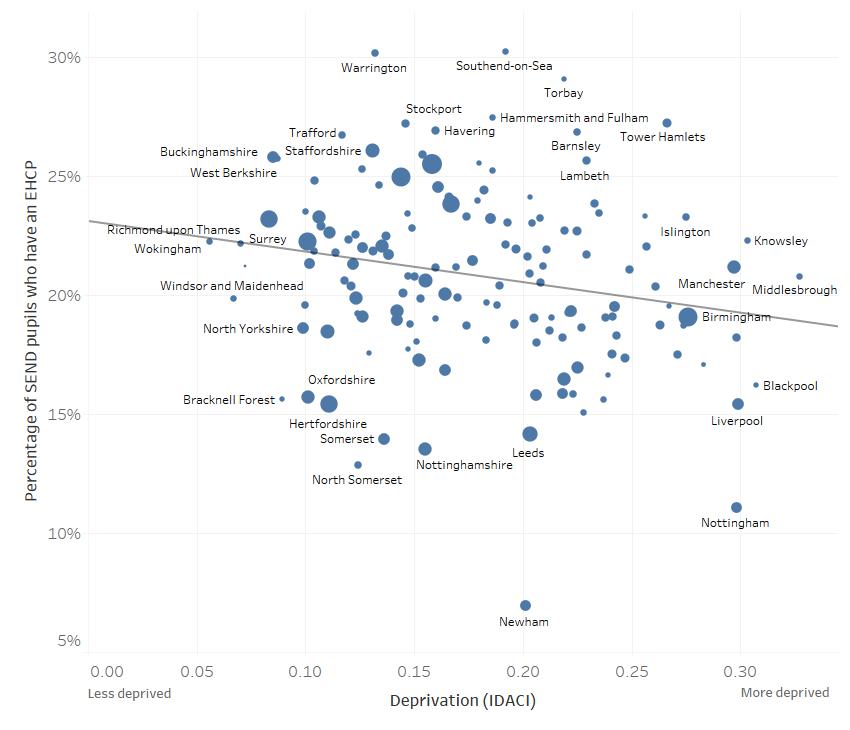 Two London LA areas noticeably buck this trend. Tower Hamlets stands out as, despite being the LA area with one of the highest levels of deprivation, it has a much higher than average proportion of SEND pupils with an EHCP. At the other extreme, neighbouring borough Newham has the lowest percentage of SEND pupils with EHCPs in the country, despite a lower level of deprivation than Tower Hamlets.

The trend for more deprived areas to give out fewer EHCPs is a concern since research shows that that SEND is positively linked to deprivation, meaning we would expect to see the opposite relationship. There are many possible conclusions to draw from this but, from our own experience working with schools and local councils, we believe this may be explained by parents and teachers in more deprived areas being less likely to successfully lobby for EHCPs than those in more affluent areas. In more affluent areas, parents are more likely to have private assessments carried out, hire law firms to support applications and make appeals to tribunals. This is demonstrated by the difference in the rate of appeals to the SEND tribunal. In the most affluent third of LA areas, there was an average of 3.72 appeals per 10,000 0-24 year olds. In the most deprived areas, this figure was 2.76.

Key finding: Deprivation levels in an LA area may impact the size of the EHCP cohort.

Next in the inclusion series, we look at the school placement of EHCP pupils.

Understanding the relative size and nature of an EHCP cohort is crucial to properly interpreting data about EHCP cohort outcomes.