The Inclusion Series: 2. The Story Behind Exclusions

In this article we continue our exploration of inclusion data across England by focusing on exclusions, one of the key components of our inclusion index. You can read a short summary of this article below.

Practices towards pupil exclusions have come under scrutiny recently, in part through an increased focus on off-rolling practices, and also around speculation linking them to a rise in knife crime. However, the overall rate of exclusions has increased each year for the last four years in both primary and secondary schools. Exclusions have been found to have a lasting impact on the mental health of students and can impact their relationship and trust with teachers and the education system[1]. We also know from our analysis for schools, MATs and local authorities that certain groups are disproportionately excluded. These include some ethnic groups (most notably black Caribbean), disadvantaged pupils and pupils with special educational needs and disabilities (SEND). The national average fixed-term exclusion rate in the most recent year’s published data (2017/18) is 5.08%[2] but exclusion rates are around five times higher for SEND pupils than for those without [3]. We also know from our recent work on the Post-16 SEND Review for the Mayor of London that the practice of off-rolling is particularly prevalent for 14 and 15 year old pupils with SEND, especially those with a lower level of prior attainment that can have a negative impact on a school’s GCSE results.

For these reasons, exclusions indicators are key part of our inclusion index, making up one third of the overall score. This article explores the exclusion data we have used at a regional and local authority level.

Exclusion rates are broken down into permanent and fixed period exclusions[3]. In our index, we include both these types of exclusions for SEN support pupils and for EHCP pupils separately. Although we are primarily focused on measuring the inclusion of pupils with more complex needs (those with an EHCP), the differing rates of issuing EHCPs and the importance of exclusions meant that we felt it was important to include SEN support exclusion rates. The rates shown are in percentage terms and can be interpreted as the number of exclusions per 100 pupils. We then rank local authority areas (LA areas) according to how low their exclusion rates are relative to other LA areas. The average score for each of the latest three years of data provides an exclusion score out of 100, where 100 is the best possible score.

In this article, we provide an overview of the current landscape around exclusions and then explore factors that contribute to exclusions of SEND pupils, including primary SEN type and levels of deprivation.

The interactive map below allows you to explore SEND exclusions data for each LA area in England. Hover over an LA area on the map to see its average exclusion data over the last three years, and their overall exclusions score (out of 100).

We looked at patterns of exclusion rates across local authorities and over time to see if there were any trends and we noticed a couple of interesting changes. 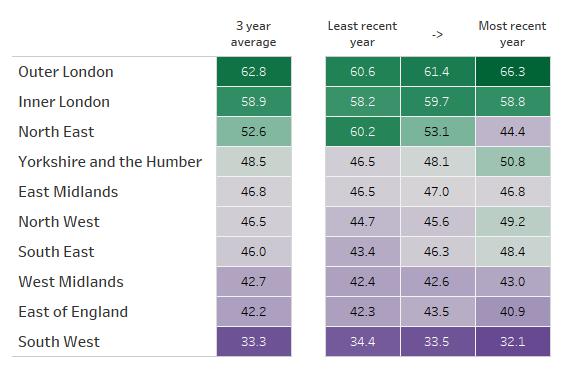 This regional pattern is broadly similar to the overall inclusion scores outlined in the first article in our Inclusion Series. Outer and inner London score the highest for exclusions, with the South West having the lowest regional exclusions score.

The North East has gone from the 2nd highest scoring region for exclusions, to one of the lowest. To understand what was driving this we looked at the exclusion scores over the three years for each LA area in the North East.

Figure 3: Overall exclusion scores by year in the North East 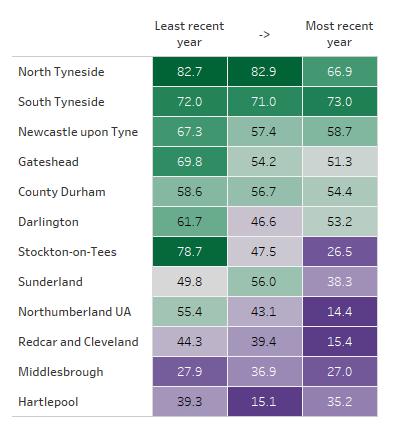 Which LA areas have the best and worst exclusion scores?

Drilling down further into the LA area figures, we pulled out the top 10 and bottom 10 LA areas for their exclusion scores and took a look at the underlying indicators to see if there were any patterns. The figures shown below are their average values for each indicator across the three year period. 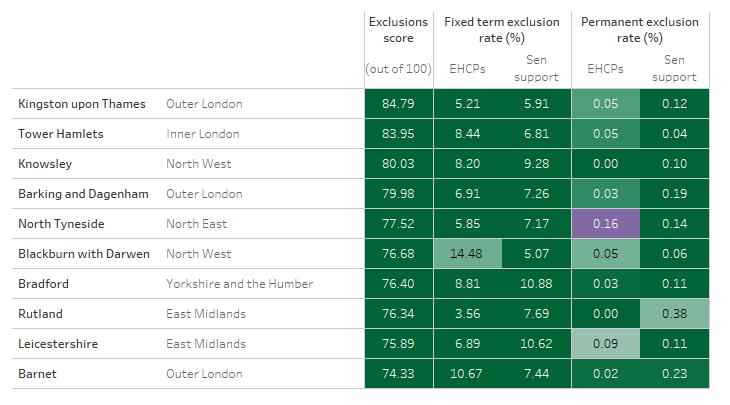 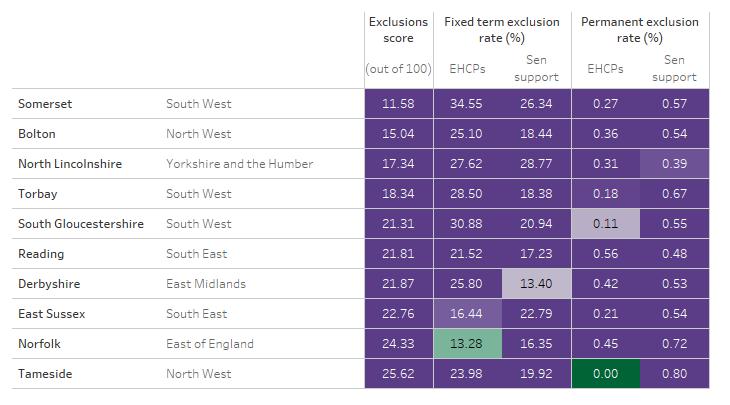 We explored why some of the permanent exclusion rates of the top and bottom ten look out of place. When drilling into the data, we found that this was primarily due to the small number of permanent exclusions in schools and the generally low rates which made the data quite volatile. For this reason, we wanted to explore fixed term exclusions in more detail as the data tends to be more stable over time.

With the exception of the North East and Yorkshire and the Humber, the rate of exclusion of EHCP pupils is far more variable within regions than that of SEN support pupils. Both EHCP and SEN support fixed term exclusion rate rates across LA areas in inner London are relatively similar, all between 7% and 17%, with the stark exception of Newham. In 2017/18, Newham had an EHCP pupil fixed term exclusion rate of over 60%, 45 percentage points greater than the region’s next highest rate. This may be partly explained by the very small proportion of SEND pupils in Newham who are given EHCPs as this means only the SEND pupils with the most complex needs are included in their EHCP cohort.

Yorkshire and the Humber have the most consistently high fixed term exclusions, across both EHCP and SEN support pupils. We wanted to understand what may be driving these high exclusion and we looked at:

1. The impact of SEND primary need

We know from our broader work that the SEMH (social, emotional and mental health) cohort tends to experience the highest levels of exclusions out of all SEND need types. To give some context, pupils with SEMH as a primary need made up nearly 17% of the SEND cohort across primary, secondary and special schools in the UK in 2018[5]. Hence, we looked at the proportion of SEND pupils with SEMH as their primary need in each LA area to understand any patterns with exclusion rates. This revealed a link between higher proportions of SEMH pupils and higher fixed term exclusion rates.

Key Finding: LA areas with a higher proportion of SEMH (social, emotional and mental health) pupils are correlated with higher fixed term exclusion rates. This is particularly true for pupils in the Yorkshire and the Humber region.

The relationship appears to be especially strong in Yorkshire and the Humber (i.e. the more SEMH pupils there are, the more the fixed term exclusion rates increase), as shown in the chart below.

Figure 7: Relationship between SEMH and exclusion rates in Yorkshire and the Humber (data averaged over three years) 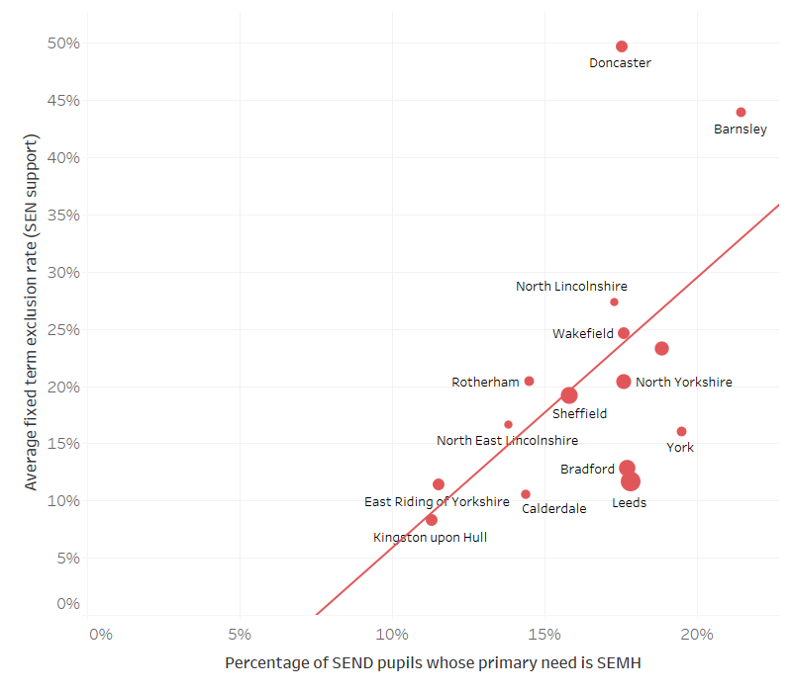 Interestingly, LA areas in Yorkshire and the Humber have relatively low EHCP identification rates: in 2019, 18.4% of all SEND pupils in schools had an EHCP, which is the lowest regional average. It is possible then that some SEMH pupils are not given an EHCP but are excluded from school. This reinforces the importance of looking at exclusion rates of both EHCP and SEN support pupils when considering inclusion.

2. The impact of deprivation

SEMH is interesting due to its link to social and demographic factors; our previous research has identified that deprivation is more closely correlated with SEMH than it is to all other need types. This motivated our desire to look at some contextual factors that may be influencing exclusion rates and therefore driving our inclusion score.

Looking at deprivation levels produced some surprising results. Firstly, we did not find a significant link between the proportion of SEND pupils with SEMH as their primary need, and the LA area deprivation level (based on IDACI, the income deprivation affecting children index). However, looking at the impact of deprivation on exclusion rates we found a general trend that more deprived areas were correlated with higher fixed term exclusion rates for SEN support pupils but not for EHCP pupils. In the 50 most deprived LA areas, an average of 18.3% of SEN support pupils were given a fixed term exclusion. This compares to 13.7% for the 50 least deprived LA areas, a 4.6% point difference. Surprisingly, fixed and permanent exclusions of EHCP pupils were slightly higher in the least deprived areas than in the most deprived areas, although the differences were much smaller.

This analysis reinforces the point made earlier that it is crucial to understand the contextual factors in an LA area to properly analyse exclusion rates. Knowing that exclusions can be detrimental to a child’s education and self-confidence, local authorities and schools should be very careful (as many already are) about over-excluding certain groups and ensuring unconscious biases are not fuelling these actions.

What does this analysis mean for inclusion?

The inclusion series continues with an exploration of EHCP assessment rates.

The very high rates exclusion of SEND pupils in some areas of England is cause for concern for those interested in making schools more inclusive. A better understanding of what is driving these exclusions will help to improve inclusion in education for SEND pupils in England.

[1] Recent studies done by the University of Exeter have found a ‘bi-directional association’ between psychological distress and exclusion. Many people in education have also argued that it is a counterproductive disciplinary tool as it teaches a subset of children who already dislike school that if they misbehave they can avoid school even more.

Ford, TJ, et al. The Relationship between Exclusion from School and Mental Health: a Secondary Analysis of the British Child and Adolescent Mental Health Surveys 2004 and 2007. 6 July 2017. https://ore.exeter.ac.uk/repository/bitstream/handle/10871/28337/Psychological%20medicine%20revision%2023%20June%202017.pdf?sequence=1

[5] This proportion in 2018 is highest in secondary schools (19%) followed by primary (16%) and then special schools (13%). This need type replaced BESD (Behavioural, emotional and social difficulties)

[6] We carried out clustering analysis and, though the sample sizes were too small to draw any conclusions for certain, we did observe that the relationship was particularly strong in deprived areas of Yorkshire