This blog post explores the latest DfE data on special educational needs and disabilities (SEND) across England. This includes data on the primary needs of SEND pupils, which we look at by phase, and by geography. We also analyse the overall incidence of SEND, including the percentage of pupils with an Education, Health, and Care Plan (EHCP) and on SEN Support. Our interactive map below allows you to analyse SEND pupil incidence and need types across England. We further explore the possible link between pupils with English as an additional language, and those with a primary need of speech, language, and communication needs. Throughout the analysis below, we have calculated the numbers of pupils with each primary need as a percentage of all school pupils. This allows comparison across the country.

This analysis looks at the percentage of pupils with each primary need type across primary, secondary and special schools. Both pupils with an EHCP and those on SEN Support are assigned a primary need.

Regional differences – why are speech and language needs so common in London?

The table below shows the relative size of the SLCN cohort in each of England’s nine regions. London stands out as having a particularly large SLCN cohort, with 4.47% of all pupils having SLCN. The North East has the next largest SLCN cohort, at 3.46% of all pupils. Only 2.38% of pupils in the East Midlands have a primary need of SLCN, only just over half the figure in London.

Are these, often large, differences in the makeup of regional SEND cohorts driven by differences in practices of assigning primary needs, are they the result of demographic differences, or is it something else entirely? Research for the DfE by the Better Communication Research Programme found evidence to suggest that having English as an additional language (EAL) can sometimes be conflated with having SLCN. They note that EAL pupils who had SLCN in primary school, were more likely to no longer have this primary need in secondary school.

“We think this implies some confusion about the needs of children who have EAL in primary school, some of which may have been categorised as having SLCN when their primary need related to the fact that they have EAL.”

If having EAL is being mistakenly characterised as having SLCN, that would help to explain why London has a much higher incidence of SLCN than other regions. In London, 41% of all school pupils have EAL, more than double the next largest regional proportion (West Midlands). The graph below supports this theory, showing that London local authorities do tend to have larger EAL and larger SLCN cohorts than those outside London. It also shows a general trend that local authorities with larger EAL cohorts have a larger proportion of pupils with SLCN as their primary need. For example, Tower Hamlets has the 2nd highest proportion of pupils with EAL in England and the highest proportion with SLCN. However, there are notable outliers, like Wolverhampton where almost 30% of pupils have EAL but there is a relatively small SLCN cohort, and Blackpool, which has a large SLCN cohort, despite having a relatively small percentage of pupils with EAL.

Figure 3 – Correlation between SLCN and EAL 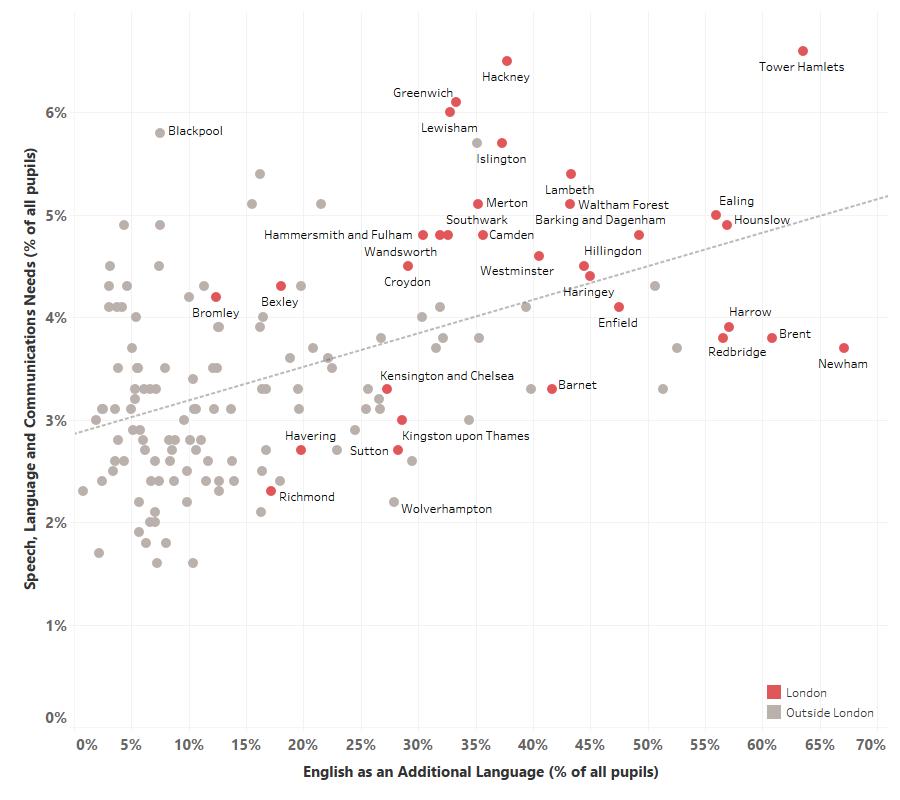 This is just one of many possible factors that could explain the regional variations identified above, and further research is needed to better understand the key drivers.

Finally, we’ve looked at the primary need of pupils by their school phase. This reveals clear differences between the types of needs being identified in primary school pupils compared to secondary pupils.