The pandemic has brought into focus the gaps in attainment between disadvantaged young people and their peers. This article looks at the latest published DfE data on the rates of young people qualifying to Level 2 and Level 3 by age 19 as well as the proportion achieving a Level 2 in English and maths*. The minimum requirements for achieving these measures are:

Specifically, this blog explores the gaps in attainment of these three outcomes between students who were eligible for Free School Meals (FSM) in year 11 and those who were not eligible for FSM. While FSM eligibility is not a perfect proxy for disadvantage, there is a large degree of overlap between the disadvantaged cohort (as defined by the DfE) and the FSM eligible cohort.

The data in this blog looks at the attainment of students who turned 19 in the 2019/2020 academic year. Most of these students will have taken their exams in previous years so the impact of the changes to the grading system in 2020 on this data is small. FSM gaps are reported as the percentage point difference between the percentage of students eligible for FSM achieving each measure and the percentage of other students achieving the measure.

Have attainment gaps narrowed over time?

As figure 1 shows, the attainment gaps between FSM students and their peers are large and persistent. Across England, the gap in the percentage qualified to Level 2 by age 19 had fallen year on year from 2005 to 2013 but has risen since. The gap in qualification to Level 3 has remained around 25% points since 2005. 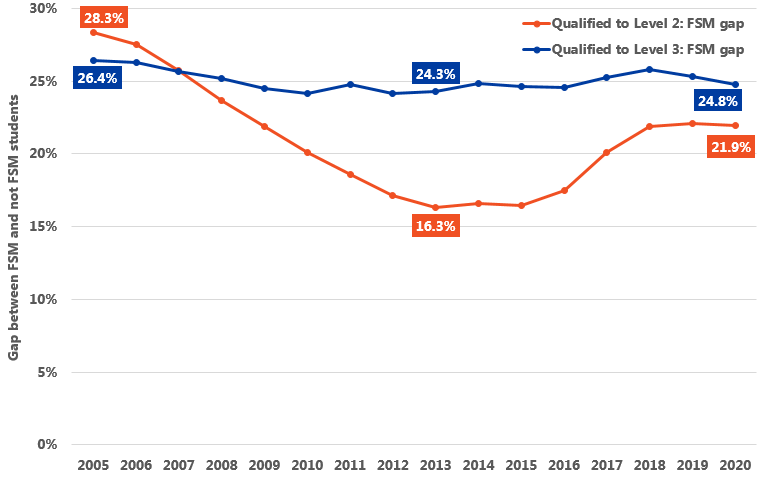 Figure 2 helps explain the trend over time in the FSM gap in qualification to Level 2. The recent widening of the FSM gap may be partly a result of the disproportionate impact of the 2014 reforms on FSM students, which reduced the value of vocational qualifications, making it more difficult to achieve a full Level 2. This is reflected from 2017 in this data, when the first cohort impacted by this change at KS4 turned 19. 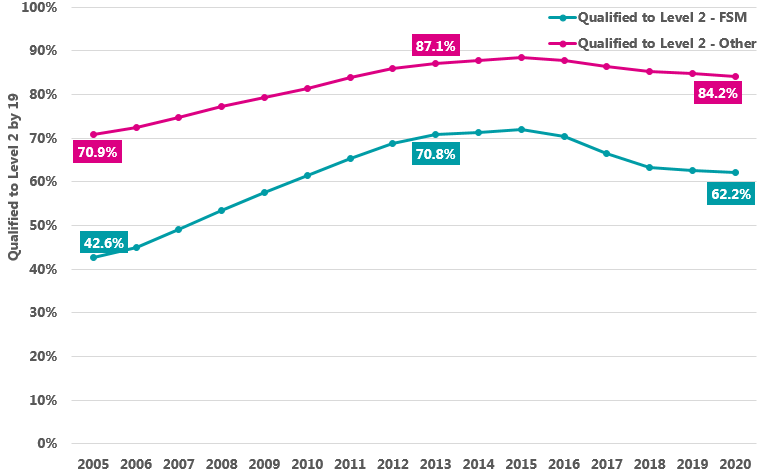 Despite large FSM gaps persisting at a national level, there is a large amount of variation across England’s regions and local authorities, with particularly small gaps in London. The map below shows FSM gaps in the rates of qualification to Level 2 by 19, achievement of Level 2 in English and maths by 19, and qualification to Level 3 by 19 in every region and local authority in England. Darker green highlights the smallest gaps and darker purple represents the largest.

Gaps in qualification to Level 2:

Gaps in achievement of Level 2 in English and maths:

Gaps in qualification to Level 3:

Why are FSM gaps so much smaller in London?

The data shows that FSM gaps in key attainment measures at age 19 tend to be much smaller in London than other regions. This seems to be at least partly driven by London being the only fully urban region, and FSM pupils typically do better in urban areas. Relatively small FSM gaps can also be found in non-London urban local authorities, such as Birmingham, Liverpool, Luton and parts of Manchester. It is also notable that the West Midlands, a region with multiple urban centres, had the second smallest FSM gaps. It is also interesting to note that less built-up London local authorities, such as Havering and Kingston upon Thames, had larger FSM gaps than elsewhere in the city.

Finally, it is possible that policies such as the London Challenge helped to drive up the performance of London’s FSM cohort relative to those outside London.

The gaps between FSM eligible students and their peers in key attainment measures by age 19 remain large across England. Even in London, the gaps are wide and show no sign of closing. The attainment measures explored in this blog are important as they lay the foundation for future outcomes for young people. For example, qualifying to Level 3 is generally the minimum standard required to go on to higher education. The attainment gaps outlined above therefore help explain why disadvantaged students are less likely to go on to higher education, as discussed in the previous blog in this series. Concerningly, given the well-documented disproportionate impact of remote learning on disadvantaged students, these gaps may be set to widen over the next few years.

*The DfE has currently not published the percentage of students qualified to Level 2 including English and maths for 2020 due to the change in KS4 policy focus and the removal of this measure from the performance tables.