Provisional Key Stage 4 (KS4) performance data was published this week. This covers the headline measures of Attainment 8, Progress 8, and English Baccalaureate (EBacc), as well as other GCSE and equivalent results. The England data shows that average Attainment 8 is the same as last year (46.7). EBacc entry has risen by 1.6 percentage points, increasing the EBacc average point score (APS) by 0.02 to 4.06. This rise in EBacc entries has been mainly driven by an increase in the proportion of pupils entering history or geography. There is still a large gap in EBacc language component entries between London and the rest of England.

How well did your local authority perform? 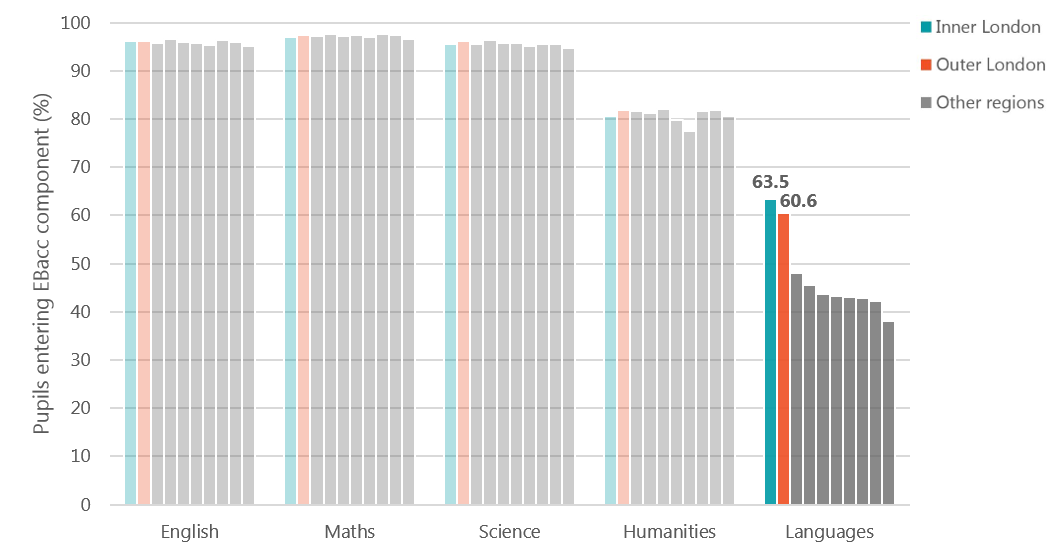 It is likely that this higher proportion of pupils entering the language component of EBacc is driving both London’s higher overall EBacc entry rate, and their higher EBacc APS. Inner and outer London are the two regions with the highest EBacc APS.

To understand why a far larger proportion of pupils are taking language GCSEs in London compared with the rest of the country, we looked at whether pupils in London are more likely to have a first language that isn’t English. We compared the percentage of secondary school pupils in each local authority whose first language is not English to the percentage of pupils entering a language in EBacc. 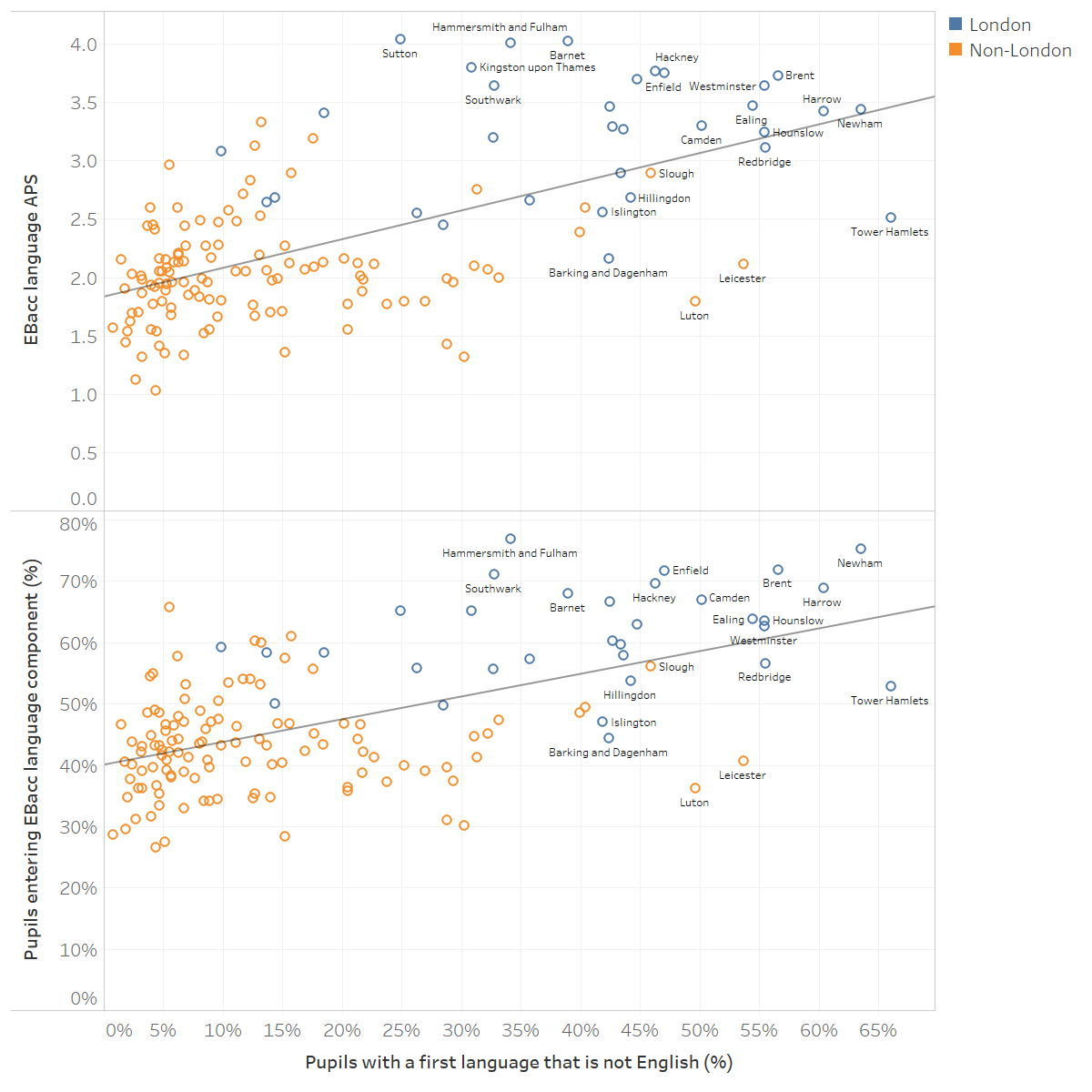 Similarly, there is a clear correlation between a higher proportion of non-English first language speakers and a higher language APS. While these higher APS may be largely driven by the higher entry rates, this demonstrates the impact on the full EBacc APS.

While the correlation is weaker, the local authorities with the highest proportion of non-English first language speakers have higher full EBacc entry rates and slightly higher average overall APS.

We were interested to find out if pupils in London are taking GCSEs in a language spoken at home. The local 2019 data on subject entries is not yet available so we looked at last year’s GCSE entries. We found that GCSEs in languages including Turkish, Bengali, and modern Hebrew were disproportionately taken in London. 79% of all Turkish GCSEs were taken in London. In the rest of England, 0.16% of language GCSEs taken were in Turkish. In London, this figure was 2.39%. Looking at the languages traditionally taught in schools we found that French and German and Spanish make up 91% of language GCSEs outside London compared to only 80% in London.

Behind the headline performance scores, there are significant differences in entry rates across England. As many key performance measures are calculated using the average across several components, having entries in more components makes a real difference to the overall score. While London’s good performance cannot be entirely attributed to languages (inner and outer London also score highly in English and maths), the higher language component entry rates are clearly driving up London’s EBacc performance. We explored whether this higher entry rate can be explained by pupils taking language GCSEs in their first language, and we have found some evidence to suggest that is a factor. GCSEs in languages that aren’t traditionally taught in schools are vastly disproportionately taken by pupils in London.

However, this cannot explain away the regional differences in performance. Today’s performance data shows that there is still significant variation across England in Attainment 8, Progress 8, and EBacc.

Nationally, Attainment 8 is level with last year, while EBacc entry rates have been driven up by increased humanities entries. Only London has a positive average Progress 8 score.