DfE Data Release: Has the KS4 disadvantage gap grown in 2021?

Following this week’s publication of DfE data on KS4 attainment in 2021, we have updated our previous analysis of the disadvantage gap. This has shown that, across England, the disadvantage gap in Attainment 8 has grown, to the largest on record. The gap between disadvantaged and other pupils is now almost a grade and a half per GCSE. 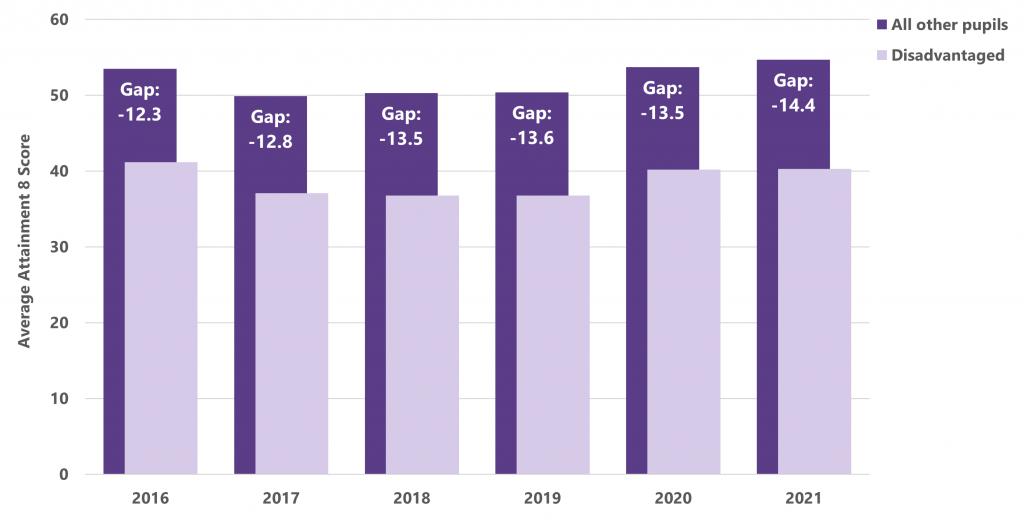 While the disadvantage gap in England has been persistent and large, 2021 saw the largest widening of the gap since the Attainment 8 measure was introduced in 2016. A gap of 14.4 points means that, across the qualifications included in Attainment 8, disadvantaged pupils have been scoring an average of almost a grade and a half lower per Attainment 8 entry than their peers.

In 2020 we pointed out that, despite the concerns, the introduction of teacher assessed grades had not led to a widening of the disadvantage gap. In 2021 however, the gap has grown to the largest since the Attainment 8 measure was introduced. Further research should explore the possible roles of the grading system, bias, and differential learning experiences over the pandemic in the widening of the gap between disadvantaged and other pupils.

As in 2020, local authorities in the major cities, particularly London, continue to have smaller gaps than those in rural areas. However, as we said in 2020, even within cities like London the average gap remains large, at over a grade per entry, and many local authorities have much larger gaps than that. As in 2020 and 2019, a very large majority of local authorities across England have a gap of more than one grade per entry between disadvantaged and other pupils. There is still clearly much more work to be done across England to close the gap in attainment between disadvantaged pupils and their peers at KS4.